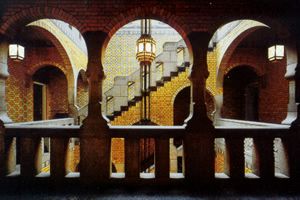 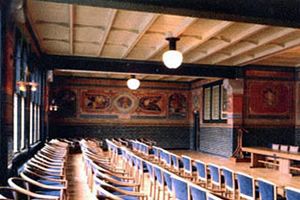 Dutch trade unions differ from the similar organizations in most of Europe, since they have always tried politically to stay in the center and to look for a compromise and not for a fight. Accordingly, The Trade Unions Museum located in the beautiful beginning 20c. building called De Burcht (Stronghold), through its modest exhibits tries to show the history of the movement and not their struggle and the accent has not been put on conflict, but on understanding.

De Burcht Today, more a social discourse and cultural center than the headquarters of a movement, building of De Burcht has been originally constructed in 1903 for the Trade Union of the Diamond Workers (ANDB), by Hendrik Petrus Berlage, Dutch most famous architect. If you have seen his Amsterdam stock exchange called today Beurs van Berlage, you will immediately recognize the architect's style - sober and decorative at the same time.

De Burcht really looks like a stronghold. Its walls are thick and it has characteristic for many Berlage buildings tower. Build from many sorts of bricks, stones and tiles, with stained glass windows inside could be easily called the jugendstil castle. The ornamental symbol of the ANDB trade union reappears in many motives of the decoration. Inside - the typical for art nouveau wall paintings by Roland Holst, only recently renovated (2001) represent among other motives two trade unionist biggest fears - The Misery and The Corruption.