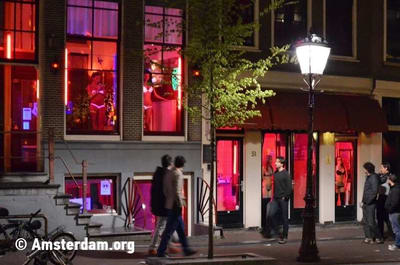 The Red Light District is without a doubt Amsterdam's most popular free outdoor attraction. It's an area where many brothels, window prostitution, sex clubs and coffee shops can be found. It is probably the most famous whore district in the Western world. 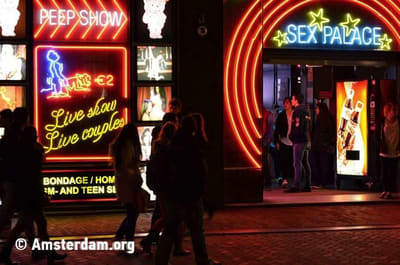 It's called the Red Light District (whores quarter) because of the red glow that's predominant at night. The typical red neon lights of all brothels and sex clubs reflected attractively on the canal water of Amsterdam. 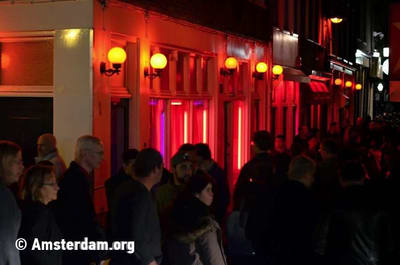 The Red Light District is really worth a visit during your city trip through Amsterdam. What many people overlook is that the Red Light District is one of the oldest and most beautiful parts of Amsterdam. Despite its shady reputation, you will find historical long winding cobbled streets with quintessential 14th century architecture, such as the Gothic Oude Kerk (Old Church) for instance. During a stroll along the idyllic canals you can relax in the warm atmosphere which hangs over the area every night.

Furthermore, you can go to the countless classic restaurants and cozy cafes. There's gorgeous rows of trees along the canals, beautiful old buildings and nicely renovated facade fronts. Also the arrival of trendy shops have gradually transformed this area into a very beautiful district of Amsterdam. In a nutshell, a visit to Amsterdam is not complete unless you've made a stroll along the famous Red Light District.

Without a doubt, the Red Light District is where women of all nationalities parading seductively and sensually behind their windows. Alcohol, drugs and sex: that's pretty much what it's all about in the red light district.

Another common sight in The Red Light District is the groups of young or old men, lovers who are holding each others hand, giggling women who are having a bachelor party, and (not to be left out) the full tour buses with large groups of Asian people. All of this must surely be enough reason that you shouldn't miss a visit to the Red Light District.

For those who want something extra, there's plenty of live sex shows to enjoy. Whether you want to go Windows shopping Amsterdam style, or actually want to buy something. No doubt there will be a location or window that will accommodate your needs Below you will find the most famous live sex show of Amsterdam:

In a historic canal house, a famous Sex Theater of the Red Light District of Amsterdam is ... 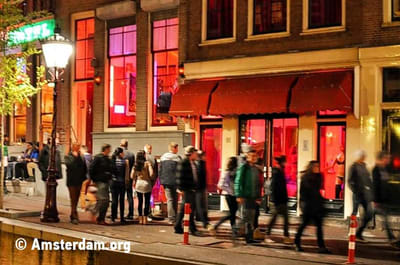 The Red Light District also has a number of eccentric shops and cafes. You do not have to look far for this sex culture, because the picturesque Zeedijk, Waterloo Square and Nieuwmarkt, are all close together. There is a wide range of videos, magazines, sex aids and toys available. Also, many gay bars and sex cinemas have settled in this area. These are mainly found in the Warmoesstraat. 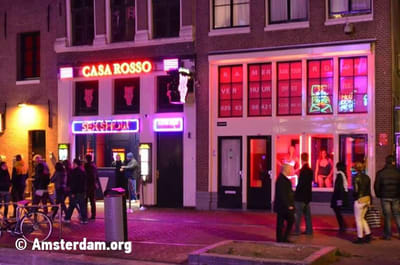 To ensure that you can enjoy the Red Light District to its fullest and your visit won't be a negative experience, we recommend the following: 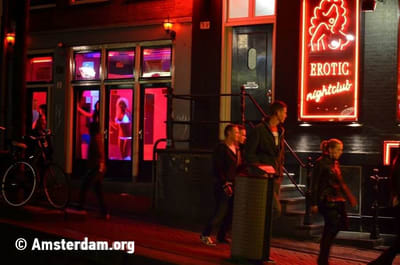 Amsterdam has three red light districts. The largest and best known of the three is the area to the east of Damrak: surrounded by the Warmoesstraat, the Zeedijk, the Nieuwmarkt and the adjacent Chinatown area. This prostitution area is approximately a 1,000 by 800 feet. The important streets here are the Oudezijds Voorburgwal and Oudezijds Achterburgwal.

The other two districts near the Singel (between Raadhuisstraat and Central Station) and the Pijp (behind the Rijksmuseum). 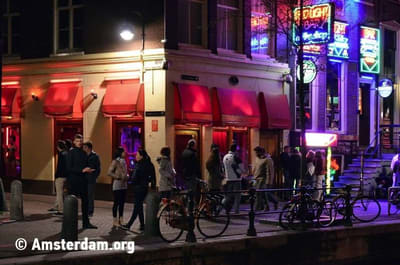 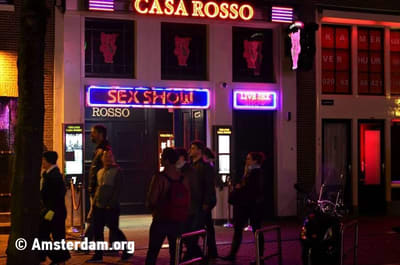 Prostitution is permitted and characteristic for the Netherlands. Amsterdam shines with pride its always so free and tolerant nature, and acknowledges the fact that humans long for sex, drugs and rock & roll. Instead of banning it, this very modern city has regulated it. This ensures that everything in this city one hundred percent real. Enjoy the honesty that exists in Amsterdam, because you won't find it anywhere else. 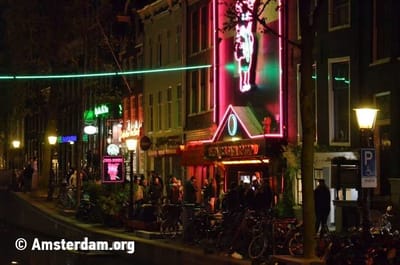 In Amsterdam it mainly takes place in the red light districts, where tolerance has been a longstanding high priority. Prostitutes may legally exercise their profession from behind the windows since October 2000. Since then, prostitutes also pay tax in the Netherlands. The government also ensures that all prostitutes have access to health care and work in satisfactory conditions. In addition, women are assisted by the Prostitution Information Center.