Squares in the center of Amsterdam 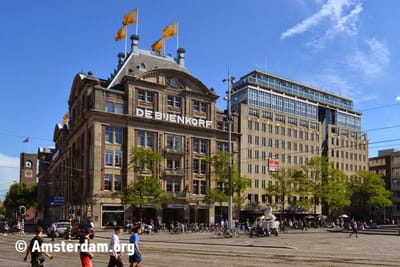 Amsterdam has several well-known squares, each with its own features and particularities. All squares offer many terraces, restaurants, cafés and shops, and they are all easy to reach on foot, by bike and by public transport. 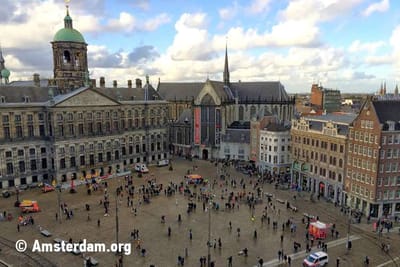 Dam is the historical hart of the city and a popular event location. The many striking buildings make it a major tourist attraction. When the weather is nice, you will always find different types of street artists: musicians, jugglers, dancers, ‘living’ statues, and so on. Dam is also used for several events, like the fair, the national commemoration, and the traditional Christmas tree.

At the west side of Dam you will find the Royal Palace from 1655. The luxurious department store Bijenkorf resides at the east side, as well as an easy passage to the Central Station through Damrak. At the north west side, you will find the exhibition location Nieuwe Kerk (New Church) and the popular shopping street Nieuwendijk. At the south end of the square is the building of the waxwork museum Madame Tussauds, as well as the well-known shopping street Kalverstraat. At the east side, there are several restaurants, cafés, terraces and the luxurious 5-star Hotel Krasnapolsky. In front of the hotel is the National Monument in memory of WWII. Behind the hotel is the Red Light District, also known as De Wallen. 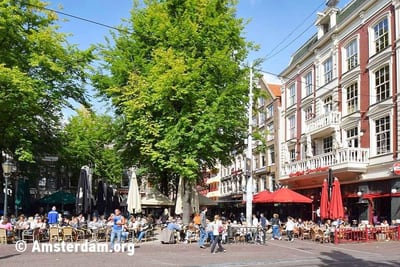 The Leideplein is a real entertainment area with countless cafés, restaurants and theatres. The square is a hangout for locals as well as tourists, and there are also many street artists. When the weather is nice, the terraces are a popular spot.

On the square, or at a short distance, you will find the Nationale Schouwburg, theatres De Balie, Bellevue and DeLaMar, music temples Paradiso and De Melkweg, the clubs Sugar Factory and Jimmy Woo, the famous coffee shop The Bulldog, a movie theatre, and the Holland Casino. Every year during the winter, the square is transformed into a temporary ice skating rink. At the southwest side you will find the remarkable Hirsch building, which houses the Apple Store, among other things. 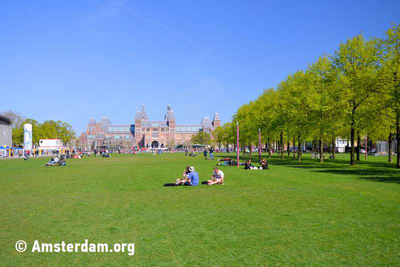 At Museumplein, you will find three top museums. First, of course, the Rijksmuseum at the north end of the square. At the west end, you will find the Van Gogh Museum and the Stedelijk Museum. Behind it, the posh shopping street P.C. Hooftstraat, the House of Bols, and Coster Diamonds. At the south side, you will find the Royal Concert Hall.

Locals and tourists use this square every day to relax and take a break. The grassy area is perfect for playing soccer or Frisbee and to have a pick nick, while under the plane trees and around the basketball field people are playing pétanque. There is also a pond near the Rijksmuseum with terraces on both sides and a museum shop. The Museumplein is also often used for different events, shows and festivals, such as: an ice skating rink, the Uitmarkt and King’s Day.

The Nieuwmarkt is a square in the Amsterdam Chinatown and borders the southeast side of the Red Light District. Around the square are historic buildings, restaurants, cafés and a supermarket. The Nieuwmarkt is very popular with locals, especially during weekends. There is a daily market, an organic market on Saturdays, and a book and antiques market on Sundays during the summer.

In the middle of the Nieuwmarkt, you will see a remarkable building: De Waag. It is the oldest non-religious building in Amsterdam. It was built in 1488 as part of the city walls that protected the city. Since then, the building has had many functions: a prison, weighs scale and museum. Right now you can enjoy a lovely lunch or dinner in this building. 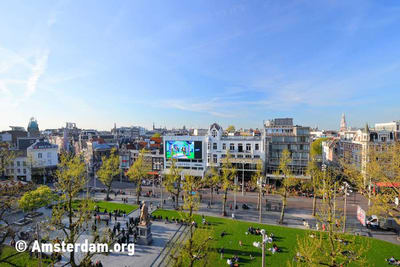 The Rembrandtplein and the adjoining Thorbeckeplein are the most popular nightlife areas of Amsterdam. The rectangular square is surrounded by trendy clubs Studio 80 and Escape, many lovely cafés, coffee shops, good restaurants, and sunny terraces.

At the north side, around the river Amstel, you will find many brown cafés which uphold the traditional Dutch music culture, including popular singalong tracks from the Eurovision repertoire. During King’s Day and Amsterdam Gay Pride, this area erupts in spontaneous festivals where all of Amsterdam can enjoy themselves. At the west side is the Reguliersdwarsstraat. This is one of the most important streets for the LGBT community with new, trendy gay bars and clubs that permanently set Amsterdam’s position as Gay Capital. The Reguliersdwarsstraat is still one of the best clubbing streets of Amsterdam. 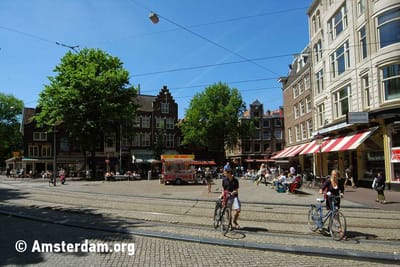 The Spui is the square between the Rokin and the Singel and is crossed by the Kalverstraat. Thanks to its central location, it is a good place to take a break during shopping. There are also several affordable cafés and restaurants in the side streets, which makes it a popular hangout for students. Also, every second Friday of the month, there is a sizable book market with about 25 book sellers, and every Sunday (March through December) an art market.

At the south side, you will find the Old Lutheran Church and Maagdenhuis from 1787. Across the street is the entrance to the Begijnhof, which was formed in the Middle Ages.