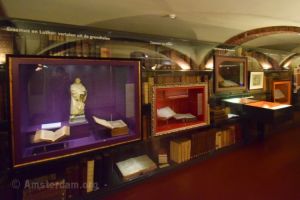 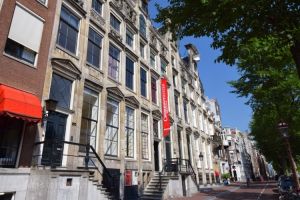 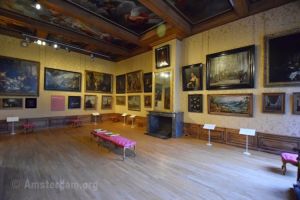 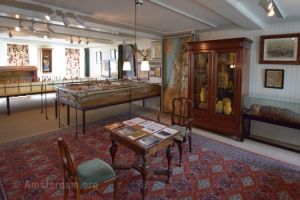 The museum about the world of just one book – The Bible. The Biblical Museum (in Dutch: Bijbels Museum) is housed in the very heart of the old Amsterdam, at the Herengracht canal. An interesting historical museum exhibits objects from the Judeo-Christian tradition, history of the Bible and the influence of the Bible on the society and fine arts.

History of the Biblical Museum
Built upon the collection of the reverend Leendert Schouten, who first established in 19c. a small parochial biblical museum, The Biblical Museum moved to its present location in 1975. It now occupies two patrician houses built for the merchant Jacob Cromhout in 1662, by the architect Philips Vingboons at the Herengracht 366 and 368. A graphic sign on the stone placed on the house’s front gable, visualizes the name of its first owner - "crom hout" means in English "bent wood". Inside the authentic interior of the houses has been preserved with two, old 17c. kitchens, richly decorated two garden rooms, the wooden English style staircase which leads to the rooms upstairs where several antique paintings from the beginning of the 18c. by Jacob de Wit are exhibited. The museum has been renovated recently (in 2000).

The Biblical Museum’s collection
The museum show the life in Egypt and Palestine at the time of Bible creation through a collection of artifacts and archaeological objects as well as the especially built models of temples. We may see a 19th century reconstruction the Tabernacle, the portable shrine built by the Israelites after their exodus from Egypt and the model of the Temple Mount in Jerusalem, a sacred place for the three religions: Judaism, Christianity and Islam. The collection of old Bibles includes the oldest Bible printed in the Netherlands (1477), as well as a first Dutch authorized translation of the Bible (1637). The struggle to publish the Bible in Dutch is intertwined with the history of Dutch independence as well as the history of the usage of Dutch as the language of religion.