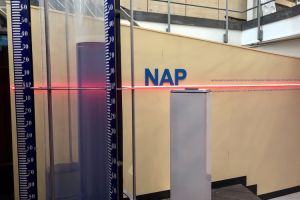 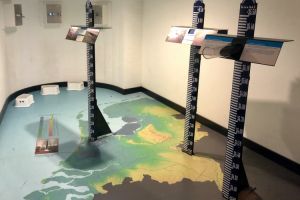 The passage between the town hall and the National Opera & Ballet on the Waterlooplein shows the only true Amsterdam water level (NAP): a bronze head will show the exact level. The NAP has become the yardstick for water level measurements in practically every European country.

Besides this benchmark, three glass columns rise up from the floor. The water in two of them shows the actual high or low tide level at sea near Vlissingen and IJmuiden. The water in the third column is terrifying; it’s almost 5 meters above NAP. That was the height the sea water reached during the 1953 flood in Zeeland. Besides the three water columns, on the wall in the hall. A large piece of art can be seen with a the cross section of the Netherlands. it depicts which parts of the Netherlands are below or above the zero mark.

The NAP is based on the water level of Amsterdam, which started in 1864 by measuring the high and low tides of the IJ during the previous year. In that time, the IJ used to be connected with the sea. In the 17th century, the water level of Amsterdam’s locks and dikes was recorded with a horizontal notch. Only later they discovered that not all notches were on the same height and the ‘Regular Amsterdam Water Level, or N.A.P was defined. The original NAP measurement point is under the Dam in Amsterdam and has been moved to the town hall (the Stopera) in 1988. Anyone can take a look at it. All water levels in the Netherlands are shown compared to this average sea level.

To get rid of the differences between the height systems of the respective countries, the countries of the European Union have connected their height systems to each other. For this European height system, which bears the name EVRS (European Vertical Reference System), they choose the NAP as zero mark (starting point), underlining the significance of the NAP internationally. Through the EVRS, the NAP is used throughout the whole European Union.