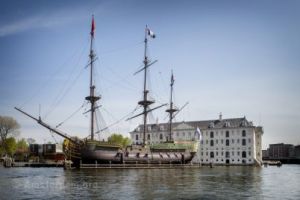 The original 'Amsterdam' sailed the North Sea in 1749, en route to the Far East. In a heavy storm the rudder broke off and the ship stranded on the English south coast.

On this replica you'll find out what it was like to live and work on a ship from that time. How long did a voyage take on a VOC ship to Asia? Did the cabin boys sleep in the same area as the captain? And what did they eat while they were on their way? The VOC ship is docked at the Maritime Museum.

With an admission ticket to the Maritime Museum, the ship can be visited daily from 9am to 5pm.